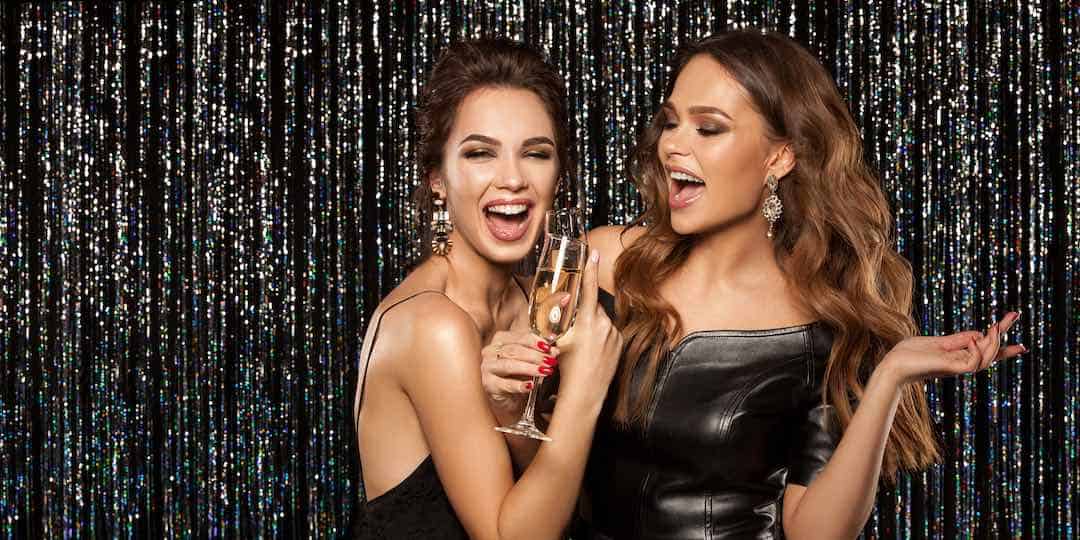 There are plenty of reasons to throw a Hollywood theme party. During awards season, having friends over to watch the Oscars or the Emmys provides a welcome escape from the mundane. Add a theme party, and you have something people will talk about for years to come.

What Is A Hollywood Theme Party?

The beauty of something as broad as “Hollywood” is that there is no limit to the possibilities. Not only does Hollywood cover the cream of the crop of fame for the past 100 years, but it also covers every character those brilliant people have ever portrayed. Silent films? Check. Movie monsters? Check and check. Chick flicks? You bet. Heroes and villains? You’re spoiled for choice!

Other staples of a Hollywood theme party include red carpets, cheap champagne with expensive labels, cardboard stars covered in tinfoil, and fake Oscar and Emmy trophies for best costume prizes. As simple and campy as it sounds, the Hollywood theme is easy to pull off — if you have the right stuff.

Is A Hollywood Theme Party Right For You?

Think Hollywood. Think big. A party with a theme like this deserves a lot of attention. You’ll want to have a decent-sized budget. The more, the merrier. A successful Hollywood theme party will also require the right venue, fun props, and a little help from your friends.

Committing to throwing the party, at this point, is committing to an unforgettable experience. “That Hollywood party you threw” will be talked about at gatherings — along with the story of a fond memory — for years.

Now that you’ve made the decision to go forward with your Hollywood theme party, it’s time for preparations. You’ll want to take a leave of absence from your job for at least a month and a large loan from your bank.

No, not really, but you do want to start the planning process right away. A Hollywood theme party takes time to do right. A poorly planned party will spell disaster on the big day.

Remember, your party isn’t just about you. It’s about your guests and the mark it makes on the history of parties. Anyone on social media knows a good party will get you a couple of likes and nice comments. A bad party will be shared and criticized by everyone. Social media may not be important to you, but it is important to who shows up next year.

The most crucial part of your planning has to be your friends. You’re going to put on a party whose very name will inspire people. Including your friends isn’t just important, it’s imperative. Consider what you’re trying to do. You could probably go at it alone and throw a decent party. Or, you can ask your friends to help, only to learn that one has a roll of leftover red carpet from that time they re-did the hallway, and another has an old sheet they can toss in for a photo backdrop.

Your friends will build teams to compete for best costume trophies and spread the word to people you can’t reach on your own. They will be the machine that chugs along in the background as you deal with things like tables, chairs, and food. Even then, they can be tapped for supplies from their garage and casseroles from their slow-cookers.

Another planning must is a backup plan. Whether your party is for a dozen friends in your basement or 100 coworkers at the Airport Radisson, you have to be ready to move if the day comes and your venue is, for one reason or another, unavailable.

“Venue” is a fancy word for “address.” In most cases, people throw parties in their homes or the homes of someone close to them. If the weather permits it, an outside party is always a nice touch. Either way, you have to know that the address of your party can handle the number of people you want to invite.

You also have to consider the little things like parking and neighbors. If you live close to people, you may want to invite them. They’re going to be far more forgiving of a party that goes into the wee hours if they’re in attendance. Make sure everyone around, including the local police, know that there’s a party happening. Pre-emptive strikes work much better than stopping the music to explain yourself to the officers on duty.

Once your venue is locked down with a suitable alternative and a solid plan of action in place, it’s time to greenlight the invites.

Three months before your party, as you’re beginning to consider things like food and music, it’s time to talk to the people closest to you for personal invitations. Far too many people skip this crucial step, thinking the burden of the party should rest solely on her or him who came up with the plan. The reality is, your friends and family are your best resource. Use them now, and you’ll avoid people telling you that they had the perfect decor accessory in their attic as they filter in with the rest of your guests.

With your resources mapped and in place, you’re ready to send invitations. Whether you’re emailing, snail mailing, or setting up an event to promote on social media, a readable, pleasant invitation is key to your party’s survival. Make sure your address is clear. Dress rules, if any, need to stand out. The date and time have to be clear and concise. An end time is helpful if your neighborhood won’t respond well to noise after hours or you’re renting a hall.

Send your invites so your prospective guests will receive them at least a month in advance. For this type of party, people need to prepare. Those who take this kind of thing seriously will have to reserve rental costumes and have them altered. The DIY crowd will need time to build scale model Delorians to wear like pool tubes with a Dr. Brown mask.

Your guests will thank you for giving them time to prepare, but don’t let them forget. Send out reminders once a week with a cool new picture or description of something they can expect to see at your Hollywood theme party.

The decorations will depend on the exact type of party you intend to throw. For a low-budget get together for pals, a few gold streamers and takeout during the show followed by drinks and a game of “Guess who the heck I am” will suffice. For an actual party, however, you’re going to want some staples.

You can get a 2-foot-wide, 15-foot-long red carpet on Amazon for under $12 shipped. Nothing says Oscar Party like a red carpet. At 15-feet long, there’s plenty of room to run it in front of a backdrop you’ve either purchased or made yourself hanging in front of the garage door.

Other staples have to include cardboard star cutouts wrapped in aluminum foil. Maybe even a fake Oscar statuette for the best of the bunch. Add to that some foods named after movie stars and a room with a big TV that screens classics all night long, and you have the makings of one heck of a Hollywood theme party.

When the day of your Hollywood theme party comes, double check to make sure everything you have planned is still a go. The venue, food, drinks, volunteers, decorations — all of your plans should be in motion. Otherwise, it’s time to call for plan B, which, when properly executed, won’t change the quality of your party one iota.

One last run-through of your time management plan with your friends is a great idea. Remind them when you expect guests to arrive, what time to expect food, and when to get people ready for costume judging. By now, they’re so in character and having so much fun that helping guide your party to the status of legendary is a joy.

Even the best-planned party has flaws. No matter how well you plan, the possibility of someone acting up at your party always exists and can put a damper on things. Severe weather happens and keeps people from attending. People can get hurt or sick. Life is full of extenuating circumstances.

Plan your party for the fun you’ll have. Planning a Hollywood theme party means planning something to remember.