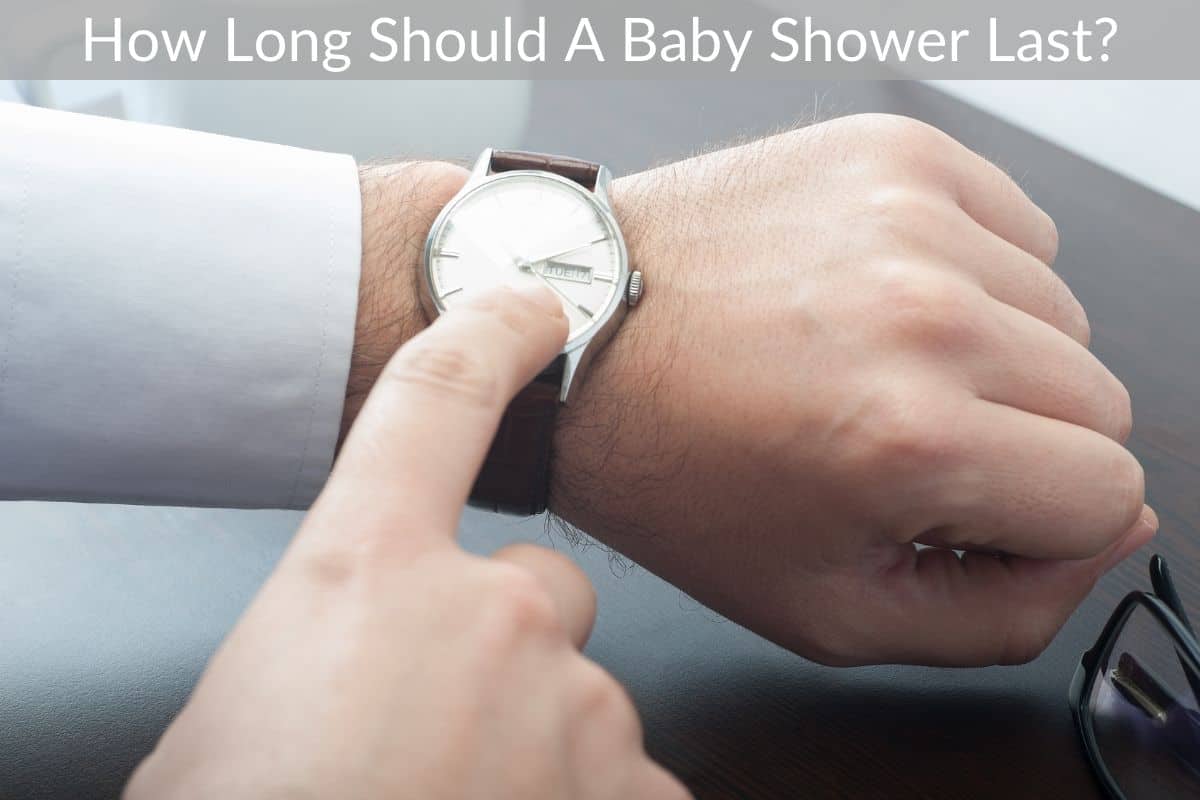 Baby showers became widely popular in the United States during and after World War II. During the postwar baby boom in the 40’s and 50’s throwing a party where guests showered the expectant mother with gifts became the tradition as we know it today.

Traditionally, baby showers are thrown by a friend or relative of the expectant mother, though not thrown by her parents. How long should a baby shower last though?

The average baby shower will last between two and three hours. This gives plenty of time for the party games, food, and for the gifts to be opened.

Of course a baby shower could be longer or shorter than this depending on the preferences of the mother-to-be and the host. If a lot of family members are traveling from out of town it wouldn’t be uncommon for a baby shower to last a few hours and then just turn into a general party after that.

Who Should Pay For A Baby Shower?

When it comes to paying for the baby shower it can get a little bit more confusing.

It’s also popular for many people to pitch in to help with costs if the baby shower is more elaborate.

The hostess will be in charge of the decorations, the food, the games, and prizes, as well as any other costs that will go along with the baby shower. Baby shower etiquette says that the mother-to-be should never be asked to help pay for the baby shower.

If a hostess wanted to, she could find one or more close friends or family members who are willing to co-host the shower. Then each person could be in charge of a different part of the shower and the costs that go along with that.

One person could handle the food while another does the decorations, while yet another plans for the games and prizes.

The hostesses should settle on a budget that they can all agree on for each part of the party. They could pool their money together and then decide what amount should be spent on the food, décor, and so on.

Or each could just pay for their section of the shower on their own but there is a chance that one person could do less than the others are expecting if things are not planned and discussed ahead of time.

How Do You Have A Baby Shower If There Is An Illness?

In a world where people sometimes get sick, you might be wondering if it is even a good idea to be hosting a baby shower if illness is a possibility. Is there a way that you can still throw a baby shower for your friend even if they or a family member are sick?

There are a few different ideas for a baby shower if there is an illness but it depends on who it is that is sick (or possibly sick).

One thing you can try is a staggered in-person shower. With this kind of baby shower, you will need a large indoor space or a spacious outdoor area for the baby shower. You will need to divide your guests into smaller groups and then specify on the invitations what time they should come.

Set up seats so that they are a decent distance apart. Food and drinks should be in individual servings, you will want to skip a buffet style set up.

Once your guests arrive make sure to have them sanitize and then have them do so again before they would serve themselves any food or drinks.

With this you could have your guests do a parade past the expectant mother’s house. Each guest could stop and drop off a gift or special message and then also pick up a small party favor.

If the expectant mother feels up to it then you could even make this a little more sociable by arranging for each car to stop and have a small five to ten minute chat with the mother-to-be before pulling away and allowing the next car to pull forward.

This will give everyone a little one on one time with the woman they are wanting to shower with love.

Guests can send gifts ahead of time to the mom-to-be or even send gift cards if they want to give a gift. You will need to make sure that the hostess moves things along so that there is not a large lull where nobody knows what to do.

You can still play games and have prizes with this kind of baby shower as well. The hostess will either deliver the prizes to the winners after the shower or ship it to them depending on how far away everyone lives.

What is great about a virtual baby shower is that family and friends from across the country and even around the world will be able to attend as well! At some point during the virtual shower the expectant mother can show off the nursery or even do a gender reveal if one had not been done previously.

Another option for a baby shower if there is an illness (or possible one) is to simply send a group care package. The hostess could ask friends and family to send cards through the mail to the expectant mother over a two-week period so that she will find nice little surprises in her mail. It is always nice to find something other than bills in the mail.

Then you could either have everyone chip in a small amount of money for a large gift for the mom and baby or you could have them drop small gifts off to your house. Then you can deliver the care package to the mother along with a card everyone has signed.

You could even do a theme for the care package. A at-home spa day, where everyone could buy something that the mom will be able to pamper herself at home with or do gift cards for different food places so that she won’t have to worry about cooking once the baby comes.

Baby showers are a fun celebration and can still be enjoyed in a safe manner even if the mother-to-be or someone else is sick or in danger of getting sick.

Baby showers are a time to celebrate the new life that will be entering the world shortly. The focus should be spent on the new mother and the baby that is coming.  With that being said, most...