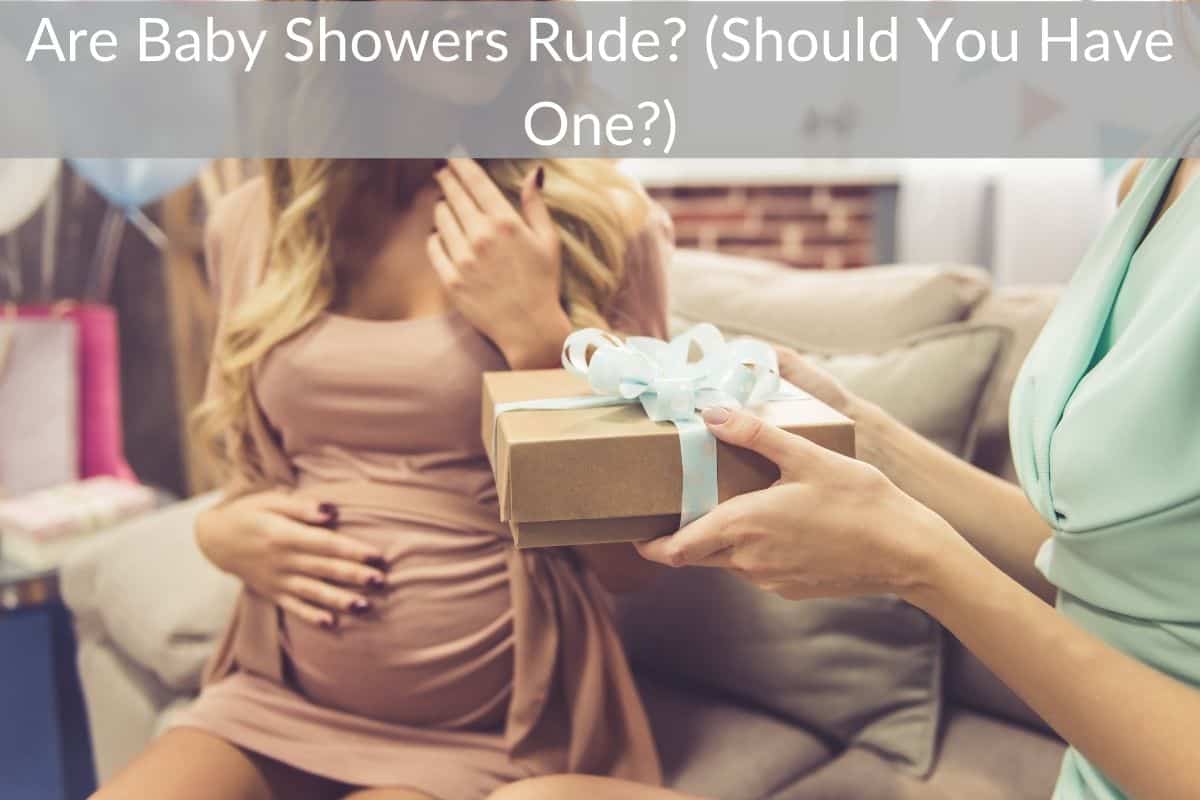 ‘Congratulations’ is iced on a large cake that sits on a pink or blue adorned table. Themed decorations cover the rest of the tables as well as the walls.

This party is centered around one word… baby. Everything is bright and happy including the expecting mother of the baby.

Gifts are collected in a corner of the room while everyone talks with that one special lady. She is about to welcome a new little baby into her and her partner’s life and this party is for her.

Baby showers can be fun and exciting. Now, you may be asking if you should even have one or if they are rude.

Well, it can be a special time but some things can be rude at baby showers.

Usually close family and friends will already have thought of this and you don’t need to ask to have one but assuming you will get one or asking would be considered rude.

It is a common fact that a baby shower will be thrown if you’re expecting your first child so don’t worry and let your family and friends take care of it all.

Second baby showers are okay to have especially if the baby is the opposite gender from first. You may have a lot of pink and girly baby clothes from your first baby shower and if the second is a boy you will want some blue and boyish things for him.

It isn’t rude to have serval baby showers. It all depends on what your family or friends want to do for you.

On a side note, if you are curious as to whether or not to have a baby shower, do it! It will be fun for the mom-to-be.

You are invited to a baby shower. Having kids of your own you are wondering if you can bring them along to join in on the fun of the party.

Before you bring your kids to a baby shower, make sure it is specified on the invite if they can join the party. It can be rude to bring them along when the parents want to stick to an adult-only baby shower.

Most of the time a baby shower is an adult-only and female-only event. Although recently these things have changed.

If the expecting mother wants kids and even men to come to the baby shower then this is totally acceptable. If kids are allowed to come, then it is usually specified on the baby shower invitation.

If nothing is ever said involving you bringing your kids, then it is best not to bring them as it can be rude if you do.

What Is The Point Of Baby Showers?

Baby showers are sweet and exciting. Food is eaten and gifts are given but what is the point of such an event?

Baby showers show support for the mom-to-be of the baby. People bring gifts to help out the new parents.

The gifts include baby clothes, diapers, etc. A party is thrown to show love and care for the parents-to-be.

Expecting moms need support throughout their pregnancy and an event like a baby shower just a  couple months before she has her baby can mean the world to her. It can relieve her stress and get her mind off of other things while she enjoys time with family and friends.

The cake is nice and the gifts are a sweet gesture and will help the parents-to-be out but the point of baby showers is that it is a time for others to show how much they love her and care about her.

Is It Rude To Throw Your Own Baby Shower?

Baby showers are always thrown by a family member or close fronds of the expecting mother. So, is it rude to throw your own baby shower?

Usually parents-to-be don’t throw their own baby shower. That is considered rude because it seems like they are asking for a party and gifts. Someone close to the mom-to-be like family or friends should be the ones to throw her a baby shower.

It is rude to throw a baby shower for yourself. This can send the message that all you want is a party and gifts and make you seem selfish.

Asking for a baby shower is also something that is rude to do because this sends the same message. If you are worried about not having a baby shower, don’t be.

Family and friends should make sure to throw you one of the special celebrations. Just sit back and relax and let them take care of all of the party planning.

Is It Rude To Not Open Gifts At A Baby Shower?

Guests invited to a baby shower should bring gifts for the new baby. Is it rude for the mom-to-be to not open them at the baby shower?

The mom-to-be doesn’t have to open her guest’s gifts at the baby shower if she doesn’t want to. However, traditionally this is what is done because it may seem rude for her not to open and thank the guest for the gifts they brought for her baby.

Most of the time the guest wants to see the mom-to-be opening up her gifts. They enjoy watching as she explains, “I really needed this for the baby!” or “This will look so adorable on him/her!”.

By choosing not to open gifts at the baby shower you may disappoint many of your guests. However, if you feel you would rather open them privately at your home then this is your decision.

Although some of the guests may consider it rude not to open the gifts in front of them, it is entirely up to you what to do.

If you are a mom-to-be with a new baby on the way and someone is throwing you a baby shower, by all means, have one! It will be fun for you and it also gives your family and friends a chance to show how much they love you and care about you.

Don’t throw yourself a baby shower or ask for one because this can be considered rude. Guests that want to bring their kids to the baby shower should check the invite or ask if it is allowed.

Bringing kids to an adult-only event can be considered rude as well.

Another thing that can be considered rude at a baby shower is to not open gifts in front of your guest. But if you don’t want to do this, it is up to you.

The point of baby showers is for friends and family to be there for the expecting mom. They are a great way to shower her with gifts and love as she will be having her baby in the next couple months.

Certain things can be considered rude so the expecting mother should just relax and let her loved ones take care of the baby shower.