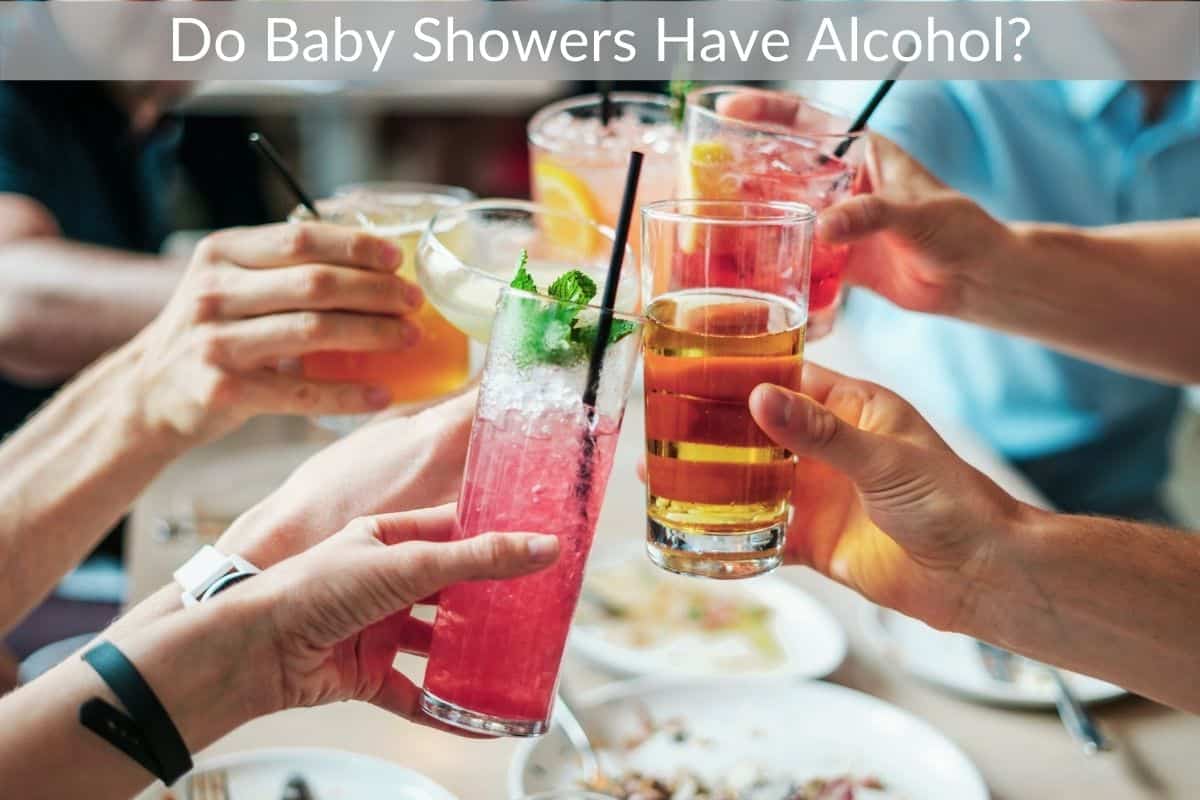 Many of these rules have been tossed out the window over the last few years. Are alcoholic drinks served at baby showers?

Serving alcohol at a baby shower should be left up to the expectant parents. Some parents are opposed to alcohol in general, others might not be comfortable watching others drink while they can’t, and some expecting mothers would be alright with alcohol being served at the baby shower.

This is something that the hostess should discuss with the expectant mother and not decide on her own. The last thing you want to do is make the mom-to-be upset so this is something to run by her.

There is no alcohol served at most baby showers but it’s also not unheard of to have it at them. Having something like champagne, wine, etc. is a classy choice if the expectant mother wants alcohol to be served.

What Drinks Do You Serve At A Baby Shower?

Some moms-to-be will want an alcohol-free shower. Others will want a more kid friendly shower.

Some of the most popular drinks at baby showers include:

Mocktails are popular at baby showers, and one of the most popular mocktails to serve is a Mom-osa. A Mom-osa is a non-alcoholic mimosa.

All you need to make a mimosa mocktail is orange juice and either grapefruit or lemon sparkling water. Another mocktail that can be served at a baby shower is a ginger-orange mocktail.

To make the ginger-orange mocktail you will need orange juice, ginger ale, and pineapple juice.

You could always serve a classic sweet tea at your baby shower as well. Sweet tea is a classic American drink, especially in the South.

There is nothing quite as refreshing as a large ice-cold glass of sweet tea, especially on a hot day.

So, if you are going to be having a baby shower in the hotter months you should consider serving sweet tea.

Another drink that could be served at a baby shower is the Arnold Palmer. The Arnold Palmer drink is named after the famous golfer. It is pretty simple to make as it is just tea and lemonade.

You can always keep your drinks at the baby shower simple if you want, serve some sparkling water, tea, and coffee. If you are serving tea and coffee you might want to make sure that there is a decaf option available, especially if the expectant mother is avoiding caffeine or if children will be welcome at the shower.

Is It Rude To Drink Alcohol At A Baby Shower?

Traditionally, baby showers are alcohol free since the expectant mother can not drink. Oftentimes non-alcoholic versions of some of your favorite cocktails will be served.

If alcohol is being served at the baby shower then it isn’t rude to partake. However if they aren’t serving alcohol and you bring your own then that would be quite rude.

Nowadays, the rules of etiquette for baby showers are not as closely followed. Some baby showers will provide alcohol and if you are attending a shower that is serving adult beverages then you should not feel like you are being rude if you are partaking in it.

Most hostesses will check with the mom-to-be before they serve alcohol at the baby shower. However, if you are attending an alcohol-free shower and are drinking that would be considered rude.

Who Should Host A Baby Shower?

Traditionally a close friend, an aunt, or cousin would host the baby shower for the mom-to-be, however many baby shower rules have been forgotten in the past few years.

In recent years baby showers have been hosted by the expectant mother’s sister, mom, mother-in-law, or a close friend. You can even have more than one hostess for a baby shower.

What Kind Of Food Is Served At A Baby Shower?

Most baby showers have games, drinks, and food but how do you know what kind of food to have?

The menu of a baby shower will vary from shower to shower. The baby shower you are hosting can have a sit-down meal or simply serve finger foods.

There will be a few things that you will want to take into consideration when planning the menu for the baby shower that you are hosting. You will need to remember that you need time to decorate the venue on the day of the party.

You might want to make food that is easy to serve and will be easy to clean up as well. Keep in mind the number of guests that will be attending.

Traditionally, cake would be served at a baby shower but you can serve cookies, cupcakes, brownies, truffles, or cake pops. The great thing about hosting a baby shower is that the menu can be whatever you want it to be.

Try to keep in mind if there are certain foods that the expectant mother needs to avoid or if any of your guests have food allergies.